Gabriel and Lucy have a book that we read often titled “Too Many Toys” by David Shannon.  In the book, the parents get so sick of tripping over, stepping on, and picking up their son Spencer’s toys that they meticulously go through them one by one and decide which toys will be kept and which will be leaving. Spencer pleads for all of his toys to remain in the house but is not too successful.  Spencer declares “That’s impossible!” after his mother yells “You have too many toys!!!” At the end of the book Spencer is found playing in a giant cardboard box, leaving all the toys he pleaded for behind. Typical.

You can see where this is going.  I don’t think I’m the only parent that has a regular toy crisis.

Our kids are very fortunate. They are showered with gifts (toys) at each birthday, Christmas, and every time Aunt Mel visits. 😉  They have their favorites and the rest seem to go untouched, or get shoved in some obscure corner of the living room never to be found again until the next toy intervention. They like their toys, but much rather prefer to go and play outside or go do something than sit and play. And G is regularly collecting cardboard for his “Ironman suit” that he is constantly crafting.

About every 6 months I go through the kid’s toys and we have a toy intervention. Jeremiah is happy to let me tackle this job and he is not an organizing fool like I am. The kids and I go through, sort, organize, and try to find homes for toys. It’s quite an ordeal and usually takes way longer than I care to spend. They have always had way more toys than they need, and clutter really gets to me, especially lately. I find their toys all mixed up amongst each other and strewn about the house, despite our efforts to get them to pick up their toys regularly.

Last week, we went through their bath toys and threw out the nasties, soaked the rest in bleach water and replaced them in the bath toy sling. That was step one and I felt a bit accomplished.

Today the kids and I went through the massive corner filled with toys in our living room.

We are consigning 1 large bag and a handful of others, throwing away 1 large bag, and found a place for the rest. I re-purposed some produce crates for storing dress up, babies, and cars/animals.  I’m making labels with pictures for the containers to hopefully encourage the toys to find their way back to their homes. I have a feeling it may be a lame try, but I’ll try it. 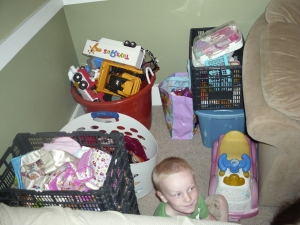 Then we moved to the art table where the kids have all their coloring books, crayons, puzzles, games. The problem is that we have 2 closets in our entire house and little to no storage. So we have to be creative. I packaged all their stuff up and is now stored under the art table and one of the couches.  Old house = creative storage. It works (sometimes).

All of you moms out there, do any of you have great storage/toy control ideas? Love to hear them!

Have a great week!

No mama can do it all. Join me in embracing the good, the bad, and those "C-" moments in between