I admit, I’m kind of getting into planning parties. Little kid birthday parties, that is.  Now that we’ve gotten into the stage where the kids can invite other friends and cousins their own age, the parties have become a lot of fun to put together and throw.  Enter my project for the past month……Gabriel’s SUPER 6th!

I knew that G would love a superhero themed party.  He’s been superhero minded since about birth!  I found tons of ideas on Pinterest, but alas most of them looked like you could spend a month’s mortgage on the supplies, food and decor, and I knew that wasn’t for us. So I did my thing in a much more frugal manner. 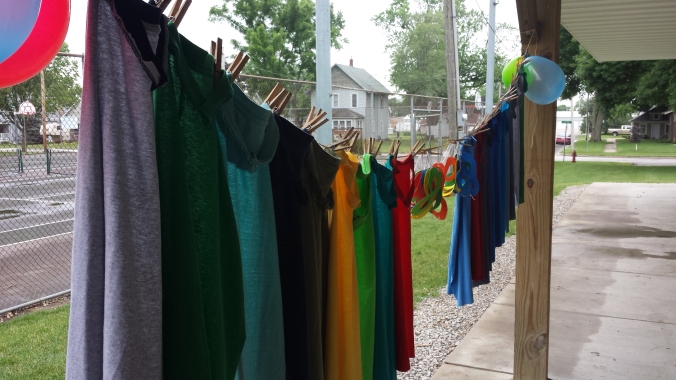 Some of the big kids got kinda fancy!

My mom spent an evening at a thrift store picking out armloads of different colored tshirts that I crafted into capes that the kids decorated–basically I cut off the front, left the head hole and stuck some velcro on it for a clousure- voila!. I found a template for a mask, cut them out of foam and tied with some skinny elastic to create the mask that they also got to decorate.  We strung some twine between the posts of the park shelter and used clothes pins to hang. Each kid got to pick out their ‘disguise’.  They loved it!

For games I set up several ‘training stations’.  Each station was a superhero-type skill where the kids could practice.

#1: Hulk smash: idea was simple. Use the giant foam fist to smash the ice cream cones as quickly as possible! (This was hard to get a picture of as they went so quickly!) 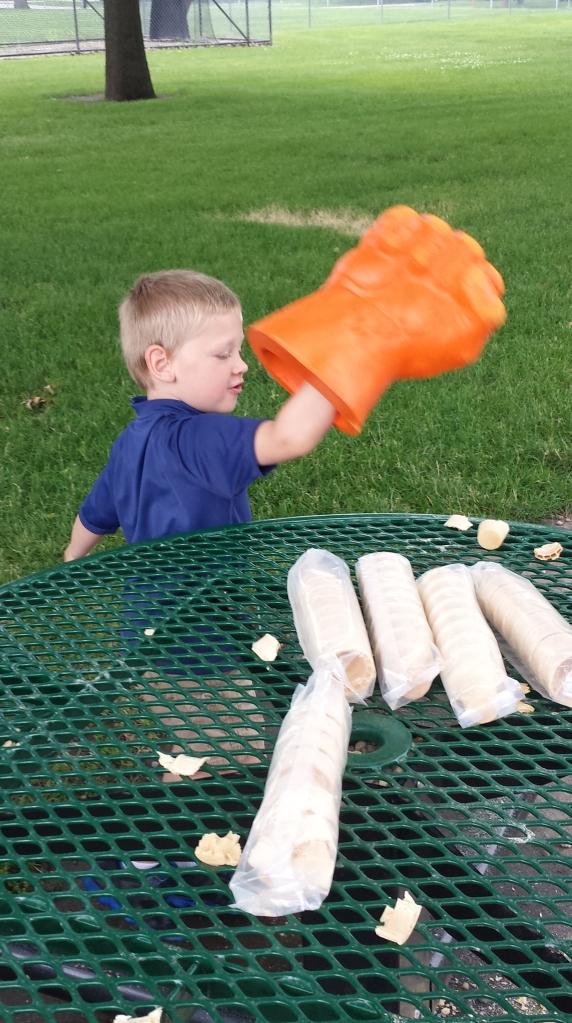 #2: Mighty muscles: build your muscles by lifting the weights with 1 arm or 2, or while lying on your back! 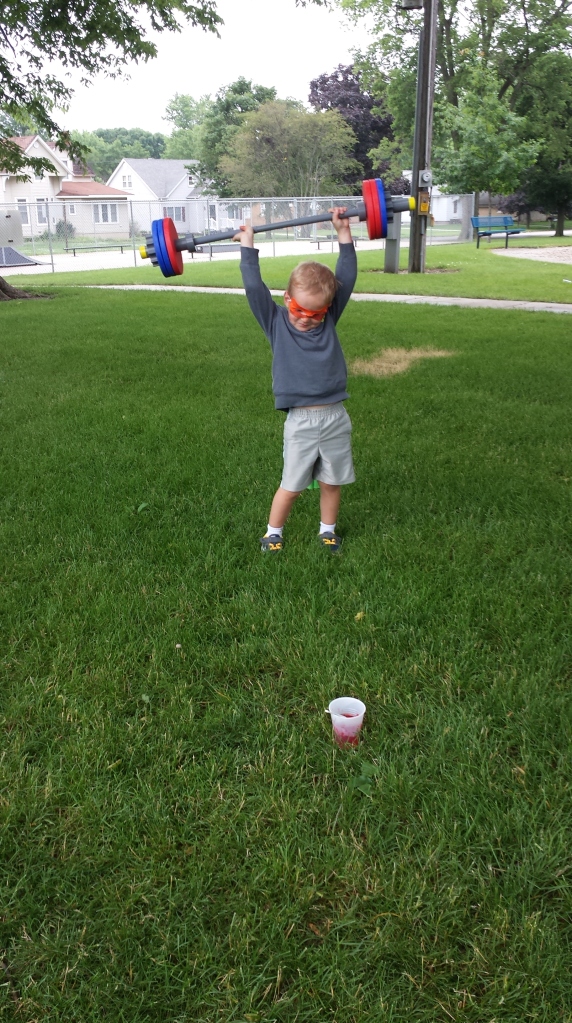 #3: Super aim: use the bow and arrow to practice your aim!

#4: Spidey balance: walk the balance beam without falling off! 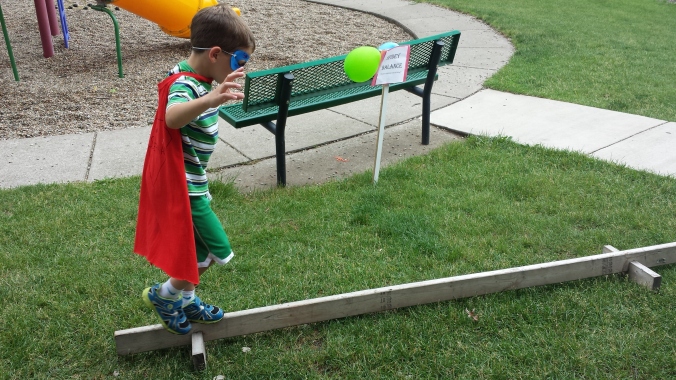 #5: Shield toss: use Captain America’s shield (frisbee) to knock over as many super cans as you can!

We played one somewhat organized game called ‘Catch the Villain’.  Here’s how it worked: G’s 2 grandpas graciously volunteered to be the villains. They went to hide in opposite directions in the park. I gathered up all the superheros in training and told them there were 2 ‘bad guys’ —who were actually nice– who were loose in the park. They were to catch them and bring them back to tie them up.  It was fantastic and they loved it! Here’s what it looked like: 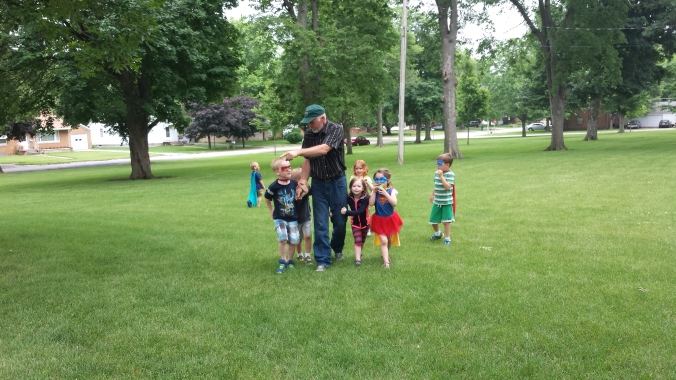 Bringing in the ‘bad guy’

Papa Bart all tied up 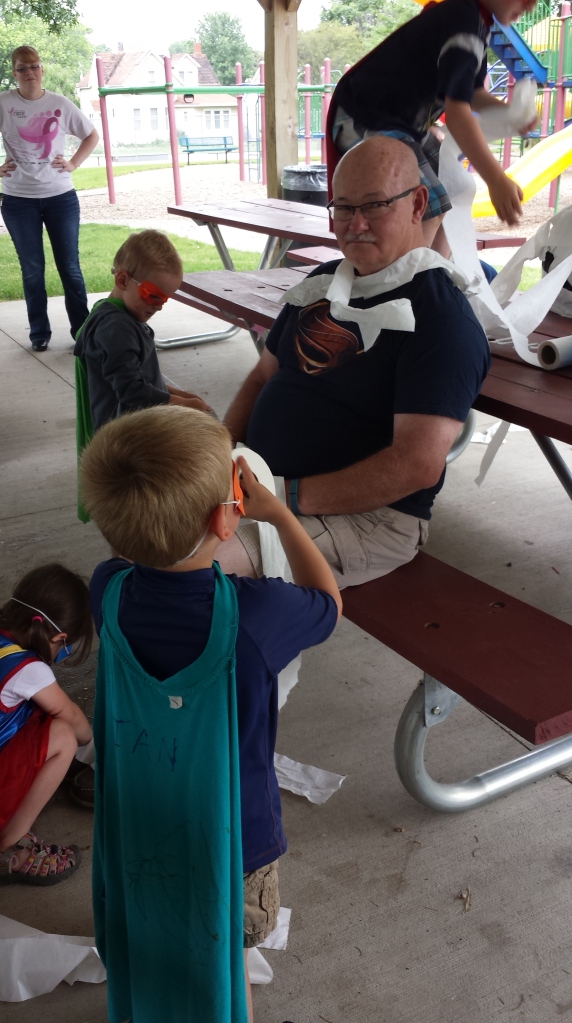 For food I did some snacks to fuel the superheroes: 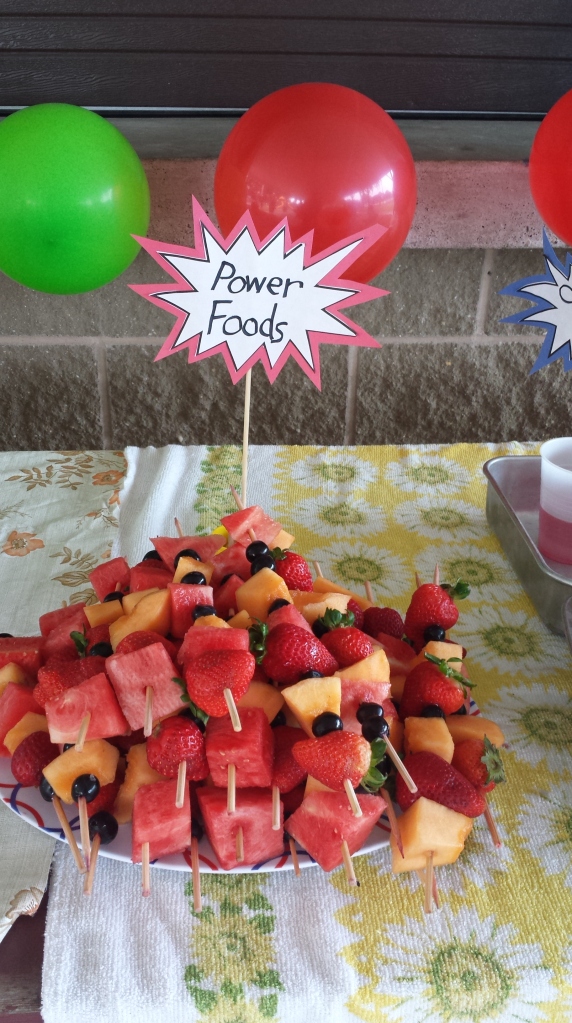 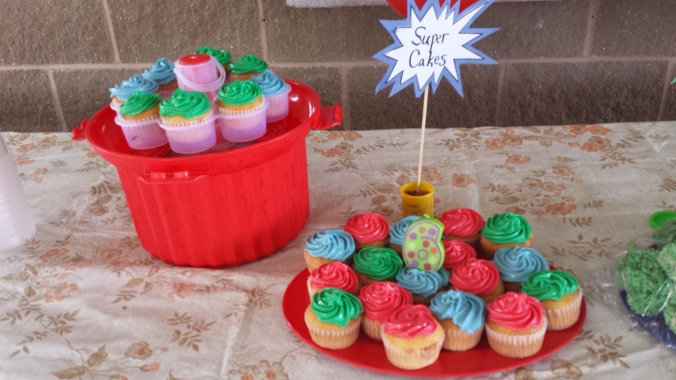 And of course we had candles on his super cakes!

Here are some of my favorite pics from the day: 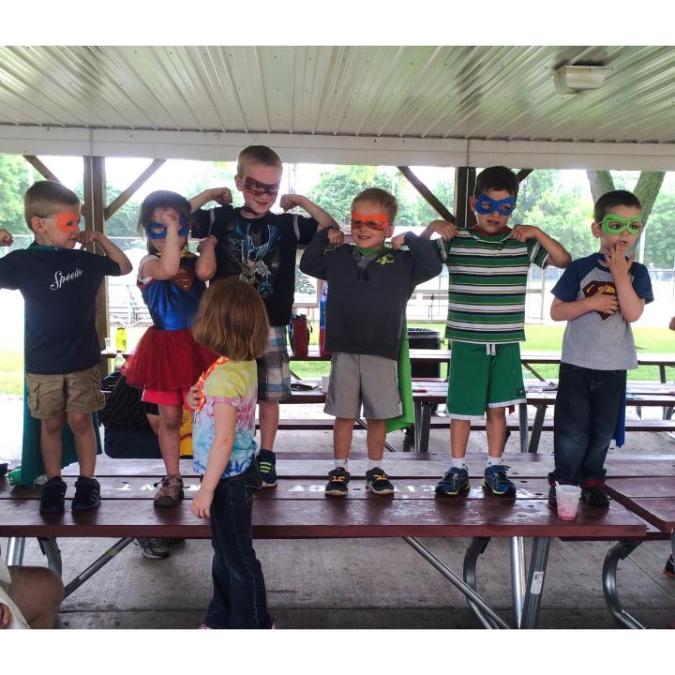 A few of the superheros that wanted to pose!

A lovin the big swings!

And there you have it! A VERY fun and frugal superhero party for an awesome (almost) 6 year old!  I had such a fun time planning it and seeing all the kids have so much fun. It made my day when one of the kids said “This is the best birthday party I’ve ever been to!”.  Not sure that’s entirely true, but it did make me happy!

Work with us at Southern Pelvic Health outside of Atlanta or Virtually from the comfort of your home or office!

No mama can do it all. Join me in embracing the good, the bad, and those "C-" moments in between