I love Christmas. Who doesn’t?! But sometimes Christmas is too much. The spending of too much money. Too many wants.  Too much pressure. Too many social standards. Too many pinterest ideas. Too many people who really don’t have enough.  Too much focus on the guy in red instead of the babe in the manger.

Christmas is about *CHRIST*, right?

It’s hard. Finding a balance between it all. Keeping Christ in Christmas but letting your family enjoy all the beauty and the magic of the season. It’s hard.

This year, we had a fabulous Christmas, and I know that if anyone asks my kids what is special about Christmas, they will say it’s Jesus’ birthday!  I hope that as they grow they ALWAYS remember this very important thing.

We started off with the Christmas pageant at our church on Christmas Eve. The kids were sheep, and have been for several years. Baaa!  Apparently you don’t move up in the nativity until 2nd grade. 😉 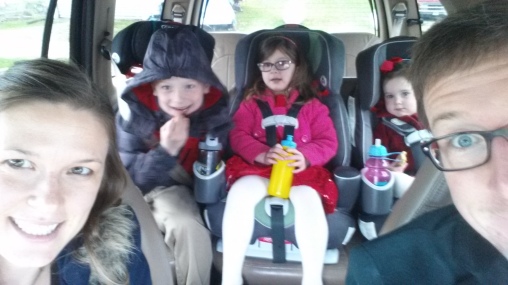 After, we ventured to Nana and Papa’s house for food, and yes, some presents. Kids were stoked. Until one of the light sabers broke. Then Lucy cried. All. the. way. home. Whoops.

We made it home and the kids happily ventured off to bed. I realized that I dropped the ball on a few things this Christmas, including separate wrapping paper for Santa.  Again, that’s not what it’s about, but I do want to try my best. And so when you drop the ball, sometimes you have to improvise…..:

This morning we had some more presents and watched the Minions movie. We got our kids each 3 things this year, plus a few stocking stuffers. No, I’m not a grinch.  I know that seems absurd to many people, but they really don’t need anything, and we attend SIX Christmases where they all get gifts. We are trying to teach them that life is about gratitude and not about ‘gimme gimme’ every time they see something they want.  They each got something to read, something to wear, and something they wanted (a toy). And the Minions movie 😉

Just as Lucy and I were putting together the beginning of her new Lego grocery store set, my phone rang and it was MITCH!!! We finally got to talk after 3 other missed calls over the past few days. It absolutely made. my. day.  I haven’t seen my brother since mid-October and have not gotten to talk to him much either since he’s been, ya know, on the other side of the world in the middle of the ocean and all.  The USO gifted some of the sailors with a 300 minute phone calling card today, and I can say that the best gift I got this Christmas was to talk to him! He is doing well and it sounds like the morale on the ship is pretty high.  I think all the Muscle Car magazines I sent helped 🙂

Next, Nana and Papa arrived and Aunt Mel, along with Percy the dog, and Mel’s alias ‘Auntie Claus’.  More presents. But Aunt Mel does what she does and is an amazing auntie, and the kids loved everything.  We ate some Christmas lasagna (amazing, btw).

Amelia took a 3 hour nap, while everyone else watched ‘A Christmas Story’, ate cookies, and did Christmas Jamberrys.  It was a good day!

Tomorrow we have yet another Christmas, our 5th one this year.  It is the biggest, loudest, wildest, and funnest one yet.  Should be a good time 🙂

I’m a caretaker by calling, at home

and at my work, but I’m about on E. Empty.  I’m not sure how much longer this can go on.  It has been a LONG 5 days of sickness in the House of Costellos.  And I believe the only thing that has saved me is the 10 Hail Mary’s I’ve been saying at night before I go to sleep!

I had big plans last Friday. I was going to take the big kids to school

, and Amelia and I were going to check

along with buying a new Christmas dress for Lucy and running some errands. We were going to be back to get Lucy from preschool and then do things around the house, pick up G from school, and do whatnot until we had our weekly family movie and pizza night.  Things didn’t go as planned. And I still haven’t finished my shopping!

Friday at 3:30am Amelia gets

sick. I end up on the couch so J can sleep, since he has to work and I don’t. Amelia proceeds to be sick all day, unless asleep. And I mean something like every 30 minutes she is sick.  We didn’t go anywhere, needless to say.  Jeremiah comes home from work

after a crazy busy (awesome) Day of Code (read about him in action HERE) and states he doesn’t feel good. 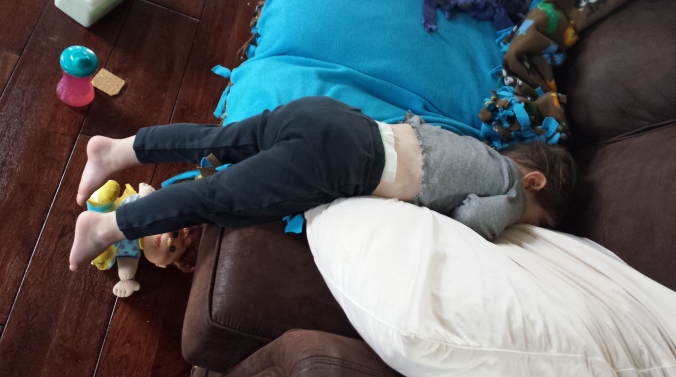 to be sick, J returns from hunting ( he got a 10 point buck!) and succombs to the couch for the rest of the day, in and out of consciousness. Lucy joins the ranks around 10am. She is SO sick.  I’m drowning. I’ve been puked on more times than I can count. There are mounds of dirty blankets, clothes, sheets. And I need a shower. I’m up every 30 mins with Lucy alllllll night. I saw every hour on that clock.

Sunday. We stay home from church and miss a visit from Santa.  Amelia is STILL sick. J and L are barely conscious most of the day. I decide to take Amelia to urgent care because 36+ hours of vomiting seems like a lot for a 2 year old. Dx virus

but they give me a med to help her with the vomiting and nausea. It works! Except she decides to throw up one more time allllll over the backseat of the car on the way home. Thanks, Pedialyte. Gabriel is about going crazy from being in the house for 2+ days with nothing to do but help me

. I rush home to find the house a mess, make a haphazard dinner, get G dressed for his Christmas concert at school, and rush back out the door. I don’t even take off my coat.  After the concert Lucy seems a bit better, but still extremely lethargic and cannot carry on a conversation. She gets sick again. O.M.G. 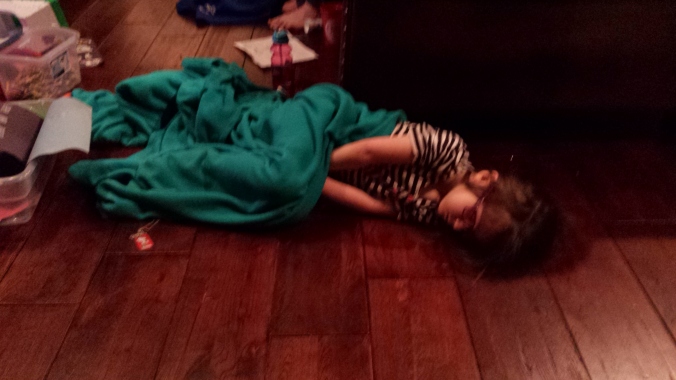 TUESDAY. I decide to take the day off so J can go to work

and I take Lucy to the doctor. We’re getting a bit concerned as she has not held anything down since Saturday morning and is increasingly confused and can barely walk. Doc checks

her all out thoroughly, and yep, not much she can do. Hopefully she’s on the upswing. Doc tells me this ‘bug’ is going around hard, and it’s all she’s seen in her office since Thanksgiving. AWESOME.  I do scads of dirty laundry and sweep

up the massive amount of saltine crumbs that have found their way into the couch and crevices of the living room floor. Amelia is staying with Nana for the day, so I take a nap. It’s glorious. I wake up to Gabriel coming in the door from school. Just prior to dinner he tells me his ‘tummy doesn’t feel good’ and heads for the couch. But 30 mins later he’s bouncing around asking for a cookie. Stay strong, G.

I’m hoping it’s over. I tentatively clean, just waiting for something else to happen.

and making ‘cards’, I think it’s a good sign

Sayonara, mother-of-all-stomach-bugs. I hope to never see you again. And I hope you see your

way out of our house

, real soon. Because this Mama has had enough of you. Lata.

Oh yes, it’s been an interesting one. Here goes:

Saturday, during the wee morning hours of 12:45am, I woke to Amelia wandering around in our room, in the dark. Yep, she had hopped out of the crib again. Saturday morning, same thing. Saturday nap: 4 times in a row. NICE.  G nor L ever did this, so this is uncharted territory. 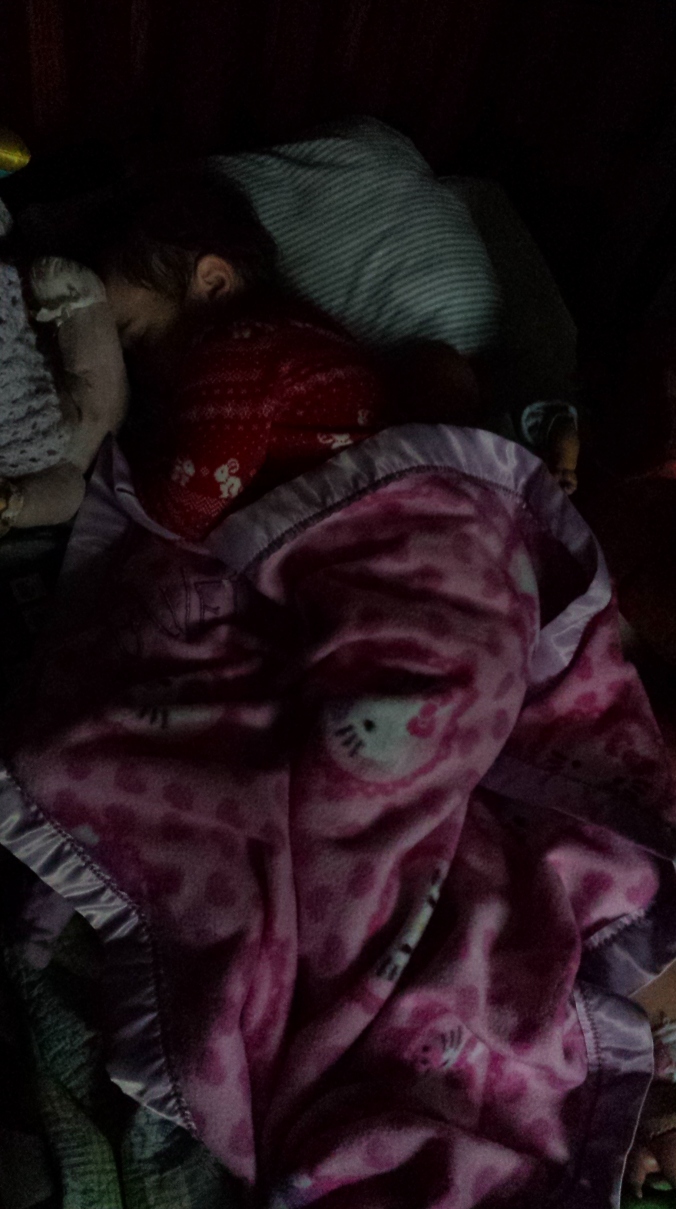 2. First time I’m glad we bought the optical protection plan.  Friday at lunch, Lucy, in her regular get-up of princess skirts, princess shoes, gloves and a handbag, fell down the stairs.  She landed just right so the hinge of the glasses busted in 2. Awesome. Never had that happen before, but I consider us lucky since this is the first break in 2 years!

3. First time my husband has been referred to as ‘Super Mario’.  The ‘No-shavember’ turned into an incentive program at Jeremiah’s school.  The students got to choose how each teacher shaved their month’s facial hair growth. Jeremiah got the mustache and ‘chin puff’. Gah.  But now he continues to sport the ‘holiday mustachio’.  He has been referred to as Super Mario look-alike.  There is only one thing to know: I am NOT a fan, he is. We have a problem.

4. First time I’ve sent a care package to the USS Harry Truman.  We sent Mitch a package full of snacks, games to play during downtimes and muscle car magazines.  I’ve never paid so much for package or had to fill out so much paperwork!  I guess it takes awhile to make it to the Mediterranean Sea, but hopefully he gets it before Christmas.  {Side note: we received word that Mitch has made it his first port, and is on land, if only for a short while}

5. First time a mobile deer blind has been built in my driveway. Yes, the Costello brothers are at it again. This time, not a treehouse, but a mobile deer blind. They first refurbished a hayrack, then added the ‘hunting hut’.  It’s been quite the ordeal, and I’m happy to shop online indoors while they build. 😉 They are using a lot of things we still have in our garage (ie doors, siding board, tin) so it hasn’t been too pricey.  Now let’s just hope they make it worth their while and bring home some deer meat in a few weeks!!!

6. First time an older change a younger’s diaper.  Parenting for the win!

7. First time I’ve made these scrumdidlyumptious nameless Christmas treats. We do a baking day each year and have never made these, until this year. We had to go back to the store for more Rolos, but they are going on the list for next year as well. Dangerous and yummy!

-The {starting a new week} Costellos